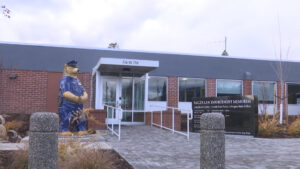 It may not seem like a lot, but Hensman said its had quite an impact.

“We thrive at our mission to support this community and it’s been a difficult couple of years,” Hensman said. “I might’ve reported that we are technically fully staffed. I can assure you that the men and women out on patrol day-to-day, don’t quite feel that yet.”

The Department is authorized to have 57 officers. As of October there are two openings – as its newest hires are waiting to go to the police academy. 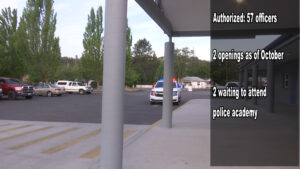 However because of the wait at the facility, it could take even longer for the officers to patrol streets in Grants Pass.

“In a perfect world, I’d like to always keep my staffing steady,” Hensman said. “It’s difficult when you have two or three officers leaving and then trying to replace those officers. It can take some time to reengage the new folks in what some might call the system.”

GPPD manages staff just like any other 365-day business, with scheduling around vacation requests and sick time. However, Hensman said often times they’ll force hire if they are short officers.

According to the chief, all police agencies have minimum staffing requirements. Hensman mandates between five and six officers per shift. If the department does not have enough officers to meet that, they’ll require someone within the force to cover the shift and pay overtime. 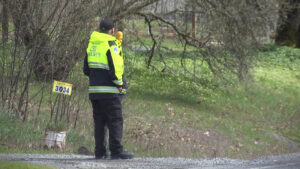 “That’s not a popular thing as you can imagine, but [the officers] receive it well,” Hensman said. “They know that they are necessary and needed to support the community.”

In general, many officers work four day 10-hour shifts. However its not uncommon for them to also work five or six days. Hensman believes the hours is one of the reasons why some reconsider policing after a few years.

“Over the last couple of years, I have seen some police officers just leave law and on to something else,” Hensman said. “I don’t think I’ve quite noticed that in my 10 years as a police leader. But I really appreciate people when they realize that this isn’t a profession for them, because its a tough profession.”

In the meantime, GPPD is continuing to work on strengthening its core, including tackling a sharp increase in domestic assault. Hensman said his unit is working on various programs including domestic violence awareness. 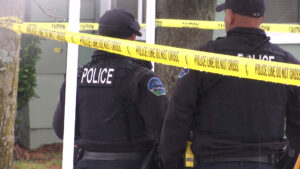 As far as its long term hope, Chief Hensman is hoping for a steady revenue stream to protect his force.

“Permanent funding would be outstanding for the Grants Pass Police Department. I think all police organizations have to do everything they can to support their own internal mission.” said Hensman.

To view part one, click here: Future of the Force part one: Ashland Police Department