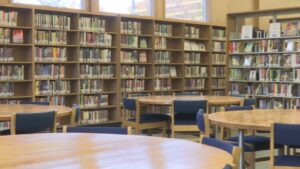 MEDFORD, Ore. — If you have a good book sitting on your shelf, now is the perfect time to start.

That’s because today (Sunday) is the first day of National Library Week!

The United States Geological Survey set this year’s National Library Week theme as  “Expanding Beyond Four Walls with the idea that libraries extend far beyond the four walls of a building.

Libraries also offer opportunities for everyone to experience technology, multimedia content and educational programs, even virtually during the pandemic.