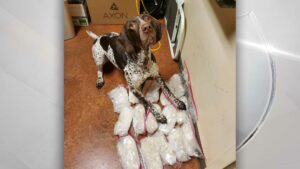 The Grants Pass Department of Public Safety said that months ago, police from multiple agencies began an investigation into a drug trafficking operation that was bringing “large quantities” of methamphetamine to Josephine County from California.

Police said on November 11, officers started following Migueal Jauregui-HernandezAngel as he drove from California to Oregon.

At about 3:15 p.m., Jauregui-Hernandez’s vehicle was pulled over.

According to GPDPS, the vehicle was searched and detectives found 15.9 pounds of methamphetamine.

Jauregui-Hernandez was taken into custody and lodged in the Josephine County Jail.