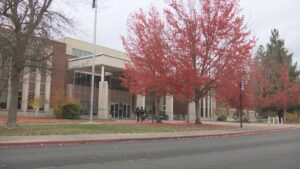 GRANTS PASS, Ore. – NBC5 News is learning more about a threat that led to a ‘lockout’ at Grants Pass High School. Police said the 16-year old student had no way of carrying out the threat Tuesday morning.

Police said a student wrote a threat on the boys’ bathroom about an attack on the school’s campus later that day. Photos of the writing spread among students, which led to the ‘lockout’.

The student went to a juvenile facility and is facing a charge of ‘disorderly conduct’ in the first degree. Grants Pass Police told NBC5 News they believe there are no further threats to Grants Pass High School.