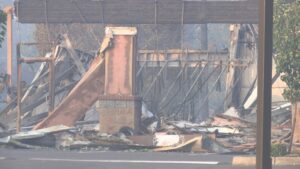 PHOENIX/TALENT, Ore. — The Almeda Fire is 60% contained with minimal growth.
That’s according to the Oregon State Fire Marshal’s office.

48 personnel are working the scenes with 12 engines and 4 water tenders.

It says a hazardous materials team from Coos County will be assessing damage, hazard mitigation and detailed searches.

“I just want to assure all the residents that we have resources in place as this weather changes this afternoon, as predicted, and if fires start back up in that containment area – we will be able to respond and mitigate those hazards,” said spokesperson, Rich Tyler.

The cause of the original fire in Ashland remains under investigation.
A man is charged with arson after police say he started a 2nd fire in Phoenix, that merged with the original one from Ashland.

The Oregon State Fire Marshal says over 42,000 civilians have been affected, with 16,000 structures still being threatened.