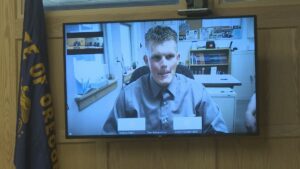 MEDFORD, Ore. – A young Rogue Valley man, who was sentenced for killing two people while driving under the influence was back in court Monday. He thought he was getting out early.

20-year old Zachry Kindred was sentenced to 68 months in a juvenile rehabilitation program.

In 2018, Kindred crashed head-on into a motorcycle on highway 234 near Eagle Point. The two people on the motorcycle, Daniel Foster, 60, and his passenger, Catherine Hock, 54, died at the scene.

A toxicology report found marijuana and cocaine in kindred’s system. He pleaded guilty.

Kindred’s attorney thought he would be eligible for early release the prosecution disagrees. The judge has set a hearing for next month.