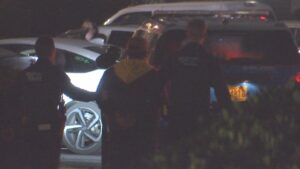 Around 7 p.m., the Medford Police Department says it got a report that a man had been shot in the 1400 block of Poplar Drive. Within two minutes, Medford police say officers found the victim in a parking lot suffering from a single gunshot wound.

The victim was transported to a nearby hospital and is reportedly in stable condition.

Our reporter at the scene watched a man get taken out to a patrol car in handcuffs, but police say no arrests have been made at this time.

Investigators believe the victim knows who the shooter is, however has been uncooperative in the investigation. MPD says there is no threat to the community at this time.

Police are still investigating, but ask if you have any information, to give them a call. Stay with NBC5 News for more on this developing story.