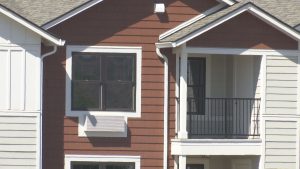 Now, with thousands of displaced people searching for a place to rent, many are wondering what to do as the housing market is more competitive and limited than ever.

I spoke with a couple property managers, who say the turnover rates, the amount of time it takes to fill an empty apartment, is only 2 weeks right now. Since the fire, they say phone calls and applications have increased ten-fold.

“Right now, we are 100% occupied at all three of our properties, that is a little over a 1,000 units at this point,” said Danette Jones, the director of operations for a few well-known apartment complexes throughout the Rogue Valley including Charles Point, Orchard Glen and newly built Smith Crossings.

She says the day after the Almeda Fire, her office received 500 phone calls with people asking about available units. “We didn’t have much available but what we had, with the exception of one unit, went to fire victims,” Jones said.

Matt Stranahan, a property director for CPM Real Estate Services says any vacancy he had is now gone.

“Our valley had a shortage of rental housing to begin with, and we just lost hundreds of our most affordable units,” he said.

Stranahan says as far as CPM’s wait list goes, there are at least 4 applications per unit. “As fast as they’re ready, they’re moved in,” he said.

Both property directors agree, people displaced by the fire should keep pursuing housing and putting themselves onto wait lists, as circumstances with unit availability shifts constantly.

Stranhan says he helped a displaced family get into a unit by chance this week, “They weren’t even first in line for the unit they applied for, but, things worked out, the people ahead of them canceled and they were able to find a home.” He said.

Both property directors say they follow fair housing rules and do not let fire victims receive special treatment, however, they say, many of their previously available units went to fire victims because they’re the ones who applied.

Their advice for you, if you’re looking for a place to rent, is to keep trying and don’t give up.

CPM is running a GoFundMe for fire victims. If interested in donating, please visit: https://www.gofundme.com/manage/almeda-fire-residents