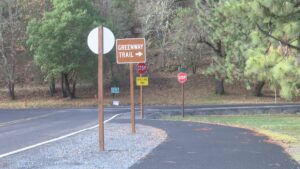 The item is up for discussion Wednesday. County officials declined to talk about their plans Tuesday. The Board of Commissioners agenda says the purpose of the idea, is for safety of the public during fire season, once declared by the Oregon Department of Forestry.

ODF has not yet declared fire season, though once the weather heats up and conditions dry out, it’s expected to come soon.

Local non-profit Southern Oregon Climate Action Now, or SOCAN is watching closely. The Jacksonville organization promotes education and understanding about climate change and its consequences and stimulates action to address it.

While the Rogue Valley is still dealing with drought, SOCAN says what makes the greenway so fire-prone is the density of the seedlings and trees there.

He says work can be done to the greenway to make it more fire-resistant to fire, like removing shrubs and thinning trees. Again, both commissioners and Jackson County Parks declined to comment on the topic until Tuesday’s discussion.