On Saturday, Jackson county Sheriff’s Office posted a photo of a dog found loose on Crowfoot road in Trail. According to S.A.R., a neighbor identified the dog after reading a Facebook post from the family of 22-year-old Tyler Evans.

Though Evans’ name and photo was not publicly released on JCSO’s post or any other agency, Siskiyou county Sheriff’s confirmed Monday that he is the man missing, and owner of the dog.

Sheriff’s noted that Evans was not found in the area of Crowfoot road, and his car was found in California – 60 miles apart. 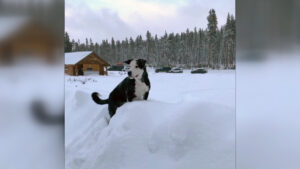 “We’re still in the active stage on this,” Sgt Shawn Richards, Jackson county Search and Rescue, said Monday. “Just trying to get that nugget that somebody possibly picked up the dog, took it home with them, and then the dog got away from them in Butte Falls or something.”
Richards noted that Evans’ family have been out searching for him since March 14th. The family’s last update on the Facebook post was on Sunday night.
“All of your shares, thoughts, help, hugs and prayers have given us strength each day. We cannot say thank you enough!!! I will do my best to keep everyone in the loop. We believe we may be close to finding our baby!!” The post said.
Anyone with information on Evans and his dog are asked to contact the Jackson county Sheriff’s Office, or the Siskiyou county Sheriff’s Office.
This remains a developing story and more details will be released as it emerges.
Tags: Jackson County Siskiyou County Tyler Evans
Share
Share on Facebook Share on Twitter Share on Pinterest Share on Reddit Share on Email