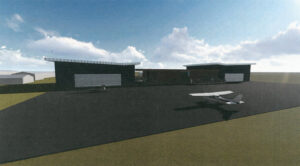 MEDFORD, Ore. —Rogue Valley International Medford Airport could soon be home to a new $20-million Education Training Center. The idea hopes to address the worker shortage in the aviation industry, across the country.

At the same time, it could boost the local economy. The idea came from MFR’s Airport Manager Jerry Brienza. According to county commissioners, the $20 million training facility could be a hub for all things aviation.

“The county commissioners believe this is so important for the community we need to do this,” said Commissioner Dave Dotterrer.

Jackson County leaders are looking at getting behind an idea, to build a new multi-million dollar facility that offers everything from pilot training to mechanics and airport management. Commissioners say the estimated price tag to bring the idea to life is $20 million. But Commissioner Dave Dotterrer says the leaders of RCC, SOU, several local school districts, charter schools, and commissioners are backing the project.

“I think having a facility like this gives us a central location with a central management that can be reaching out to the aviation community,” said Commissioner Dotterrer.

Commissioner Dotterer says the funding and operations of the site are still being worked out. And the county is working with educators to make sure the project would fill a local gap.

“We wanna make sure that any young person who wants to get into this field has as many opportunities to see the different aspects and see this menu and determine what aspects they like the most,” said Commissioner Dotterer.

The idea comes about as aviation across the US faces a lack of pilots. One report says there will be a shortage of more than 12,000 pilots by next year.

“The idea behind this is as with most industries there’s a lack of workforce, and this is a tremendous opportunity for young people to get involved in the aviation industry,” said Commissioner Dotterer.

Up north, another program is also trying to combat the issue, it’s called Ascend Pilot Academy. Alaska Airlines is putting $6 million down on its new pilot academy partnering with Hillsboro Aero Academy to help register and train 250 students each year.  Students go through schooling, then acquire the flight time needed to gain their commercial license.

Commissioner Dotterrer says the county is in the process of reaching out to a consulting team. It’ll help them better understand what initial programs would be offered, as well as management and funding options.