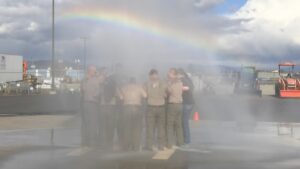 CENTRAL POINT, Ore. — The Jackson County Sheriff’s Office came together with Jackson County Fire District 3 this morning to help raise money for a good cause.

Around 10 sheriff’s deputies were soaked by the firefighters to benefit the Special Olympics of Southern Oregon.

It took place outside of the sheriff’s office, raising nearly $600 in the first time the event’s been held.

“I watch what these kids do, all these athletes – and to me they’re family, so seeing all these people come together to support a good cause, I love it,” said JSCO deputy, Brian Kolkemo.

The event concluded by 12 p.m.

If you’re interested in donating toward the cause, Special Olympics of Oregon is collecting donations until the end of March.

Donations can be made at soor.org.