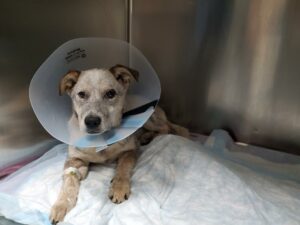 GRANTS PASS, Ore. – A Josephine Co. rescue is asking for help after a puppy was diagnosed with Parvo, a highly contagious and sometimes deadly virus in canines.

NBC5 was told the 5-month-old puppy named Penguin got sick with parvo earlier this week. Experts said the disease could kill younger dogs.

Tail Waggers Rescue in Grants Pass helps dog owners who are displaced. Now, the non-profit is stepping up to pay for Penguin’s treatment but is $800 short.

“As a rescue, we can only do so much because we only have so much funds. It just happens to fall at a bad time where we had to transfer the dog to a specialty center,” said founder Maria Modica, “She needs to live,  she’s 5-months old. She has a whole life ahead of her”.

Modica is asking anyone willing to donate to click HERE.