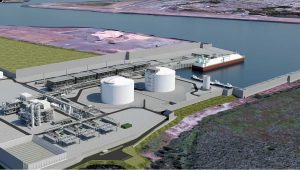 The Jordan Cove Project has been in the works for well over a decade. The proposed pipeline would span 229 miles through Oregon, with a liquefied natural gas terminal in Coos Bay.

Early last year, Pembina—the Canadian company overseeing the project—was granted federal approval to move forward with the Jordan Cove Project. However, that didn’t exactly give Jordan Cove a green light. Pembina’s plans still had to be approved at the local level with state permitting and more land-acquisitions before construction could begin.

After the decision, Jordan Cove asked the Federal Energy Regulatory Commission to find the State of Oregon waived its authority to protest the project under the Clean Water Act. This would have allowed plans to move forward without expressed approval from the state. However, on January 19, 2021, FERC denied Jordan Cove’s petition, saying the project never formally requested a waiver from the Oregon Department of Environmental quality and the state agency “could not have waived its authority to issue certification for a request it never received.”

The Jordan Cove Project cannot move forward without a Clean Water Act approval from the state.

“Today’s decision confirms Oregon’s right to protect its communities and waters from big polluters like the proposed Jordan Cove liquefied natural gas terminal and pipeline,” said Andrew Hawley, attorney at the Western Environmental Law Center. “We have battled this harmful behemoth for decades and defeated it at every turn. With everything we know today about climate change this project must never again rise from the ashes.”

NBC5 News has reached out to Pembina for comment. So far, we have not heard back.