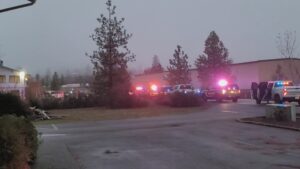 The Sheriff’s Office is being tight lipped about details.

The incident happened at a building located in the North Valley Industrial Complex on Corporate Way.

The Sheriff’s Office didn’t provide a specific address, or say if anyone was hurt, but it did say it’s an active shooting investigation.

Just before 7 this morning, it says it received a 9-1-1 call reporting a shooting in the area north of Merlin.

Deputies and OSP troopers responded to the area and discovered a crime scene.

A man who does not want to be identified, but was working at a building near the scene, shared video with NBC5 News showing dozens of law enforcement officers at the scene early this morning.

When we arrived there at about noon, the area of Corporate Way was blocked off.

Businesses in the industrial park said they didn’t know what happened.

The sheriff says no further information is being released.

Two nearby schools, Manzanita Elementary and Fleming Middle School, went on a precautionary lock-in before staff or students arrived for the school day.