KLAMATH FALLS, Ore — Emergency Airlift in Klamath Falls will be transporting the body of a U.S. Marine who was killed in Kabul, Afghanistan in August.

U.S. Marine Sergeant Nicole Gee was one of the 13 U.S. troops killed by a suicide bomber during the Kabul airport attack on August 26th. Her family held a memorial service in their hometown of Sacramento, before her body is transported to be buried at Arlington National Cemetery in Virginia. 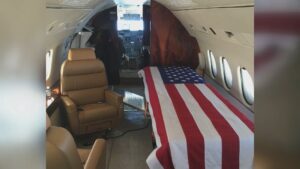 Ed Langerveld is the owner of Emergency Airlift. The company has locations in Klamath, Honolulu, Hawaii and Miami.

Langerveld, a Marine Veteran, partnered with “Honoring Our Fallen” organization to transport the body. Langerveld heard about the difficulties the families faced in transporting her to Virginia, and wanted to assist them free of charge.

“As you can imagine, it’s quite expensive to [transport] so we felt compelled to step up and make that happen for them,” Langerveld told NBC5 Friday. “I can understand the grief that the family is going through. We have the lift capability, base, stretcher, and everything to do this kind of mission.”

Langerveld placed the name of Sergeant Gee below the United States Marine Corps decal on the jet that will transport her. It plans to fly out to Washington D.C. Monday morning.