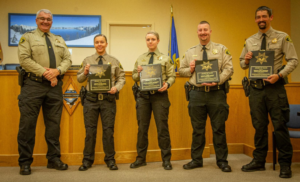 KLAMATH FALLS, Ore.– On April 10th, 2020, officers responded to a domestic disturbance on the 1700 block of Fargo Street in Klamath Falls.

The chase ended when on Wocus Road, when Goff unloaded at officers.

Klamath County deputy DA, Cole Chase, said, “He had an ar-15 style weapon, ten magazines fully loaded, fired at least 36 shots into the vehicles occupied by the troopers and the deputies.”

The firefight left the suspect dead at the scene and two officers injured.

The boy was unharmed.

The boys mother later said about officer Gordon, “I would just really like to thank him.”

Last week, 4 Klamath County sheriff’s deputies who were involved were by sheriff Chris Kaber and other county officials.