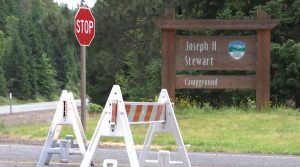 Plenty of locals have been laying low and staying home during the pandemic. After months, many are now eager to get outside and enjoy the beautiful outdoors.

Luckily, some state parks will be reopening June 9th. However, according to state park officials, there are a few things to know before campers pack their tents.

Joseph Stewart Park, along with 26 other state campgrounds will be open for limited camping on Tuesday, June 9th.

“We’re not going to have all of the services we normally do. We have restrooms open in almost every park but showers are going to be in short supply,” said Chris Havel from Oregon State Parks and Rec.

He also said campers need to be more self-reliant than they are used to.

“Reduce the amount of trash that you produce in the first place and bag and remove as much of it as you can on your own,” said Havel.

He says the department is excited to open campgrounds but it needs help from campers.

“We don’t really have the staff to keep up with the landscaping and the cleaning we normally do,” said Havel.

Campgrounds in Jackson County are dealing with the same lack of staff. Its campgrounds opened in May.

“As people start to come back out we’re able to manage our budget with not as big of a hit,” said Steve Lambert, the Jackson County Park Manager.

He said despite the rainy weather over the past few weekends, reopening has gone well.

“Folks seem to really be listening to the [COVID-19] recommendations and taking them in stride. They’re behaving themselves and we’re pleased with that,” said Lambert.

With plenty of summer left, there is still time for campers, hikers and boaters alike to get outside and enjoy Mother Nature.

It is recommended to make a reservation online when using state or county campgrounds.

Below are the state parks that open on June 9.