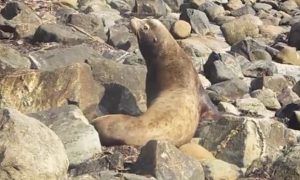 OREGON COAST, Ore. – Officials are warning beach goers to use extra caution along Oregon shores due to an outbreak.

The disease, Leptospirosis, is currently infecting sea lions off the Oregon coast.  It can spread to dogs, livestock, wildlife and even humans.  According to the Oregon Department of Fish and Wildlife, the last marine outbreak was in 2010. This outbreak became apparent as the Department started receiving daily calls reporting dead sea lions on Oregon’s shores.

Leptospirosis bacteria can cause fever, diarrhea and even kidney failure.  If you encounter a sick or dead sea lion, you’re urged to keep dogs on a leash, stay at least 50 feet away and call Oregon State Police at 1-800-452-7888.