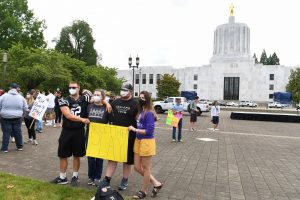 CENTRAL POINT, Ore. — An update to a story we’ve been following about the #LetThemPlay initiative, to allow high school and youth sports in Oregon to resume.

That means the possibility of having any fall sports and other activities is in real danger of not happening, but it is possible and that’s what advocates are working towards.

“We’re not done with this until all sports and all activities have some reasonable path back. so, we’re united in that front and I’m really proud about the way people have come together from all ends,” #LetThemPlay advocate, Julian Cordle, said. “If it can happen on the professional and collegiate level, we can make it happen, safely, respectfully at the high school level and the youth sport level. I would argue that with even more impedance and strength on that argument that those people are willing to make that happen,” he added.

The group says a decision needs to come down from the governor and the state within the next two to three weeks.

Jackson County Commissioner, Rick Dyer, is working with US senators in Washington D.C. to get support.