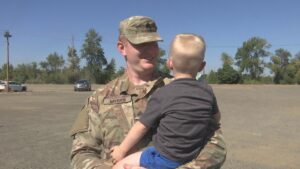 CENTRAL POINT, Ore. — Tuesday was a day filled with plenty of hugs and tears for a few families in the Rogue Valley, as another group of local Oregon Army National Guard soldiers returned home from overseas.

One of the final groups of the 1-186th Infantry Battalion touched down at the Medford airport Tuesday afternoon. The citizen-soldiers arrived at the airport and were then greeted by family and friends at the Jackson County Expo.

“Just being with my family,” Sargeant Cameron Myers said, describing what he’s most excited about being home. “I missed so much with being gone with [my son,] that I’m just ready to get back in it all again.”

After nine months of serving as security in the Horn of Africa, the soldiers said they’re happy to stand on home soil.