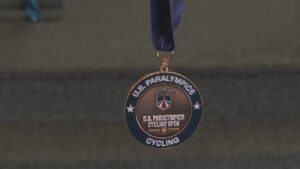 MEDFORD, Ore — A local store owner and tandem bicycle racer, won a bronze medal from the U.S. Paralympics in Alabama.

Stan Moore is the owner of Stan’s Bikes and Pool Supplies. He’s a blind and deaf professional tandem racer.

He was introduced to racing when he was 16. A year later, he entered into a state championship and got 13th place. But that was just the start.

Later in his life, his eyesight started to diminish due to a hereditary disorder.

“To get up on the podium with, you know, with some of US’ best tandem racing team, pretty exhilarating,” Moore said.

Next week, Stan and his partner will fly to Belgium to compete to play in the Tokyo Paralympics. He has a go fund me to raise money to help travel that you can find right HERE.