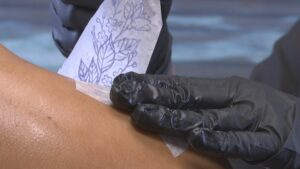 MEDFORD, Ore. — In the era of covid-19, for many businesses it’s anything but business as usual – and that applies to tattoo parlors.

Staggering clients appointments and keeping its tattoo guns sanitized and covered with a plastic wrap, are just a couple of precautions the studio is taking.

The business employs 3 full-time tattoo artists who specialize in cosmetic procedures, as well as general tattoos.