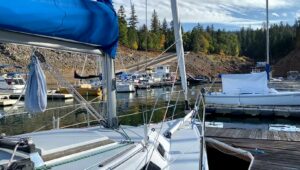 The woman who used to lease it has filed a lawsuit against the state parks and recreation department.

Cindy Broadwater and her family leased and ran the marina for nearly two decades, but Broadwater’s long lease is up.

According to her lawyer, she’s tried to negotiate a compromise with the Oregon Parks and Recreation Department, or OPRD, after her lease ended at the end of December.

The state is looking for someone to sign a new lease for the public marina.

“We’ve got these boat owners sitting there and we’re sort of still waiting,” spokesperson for Friends of the Lost Creek Lake Marina, Paul Richards, said. “What are we supposed to do, really? We need really clear, definite, direction about it and so far, nobody has contacted us directly and that would be nice if that were to change,” he added.

The Oregon Parks and Recreation Department announced last month that it was looking for someone to sign a new lease for the public marina at Lost Creek Lake.

Both Broadwater’s attorney and the state said the previous contract prevents her from signing a new lease for the marina.

Here’s how you can help: GoFundMe and Lost Creek Lake Marina Facebook page.