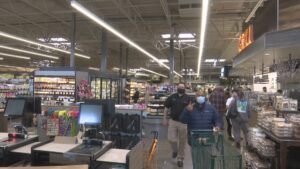 He said customers show the most excitement for the variety of produce and the mushrooms, as well as the cakes and meal-ready foods.

He said he’s proud of how hard the staff work to make sure the store is clean and stocked every day, always looking like it just opened.

“It’s been nice to see the energy from the employees,” Viefhaus said. “everybody’s been real excited. watching the interaction between employees and customers has been a lot of fun and even the people that are relatively new to the business, not just this job, they’ve been picking up really quick,” he added.

Viefhaus said they don’t expect the amount of customers to slow down for at least another week.