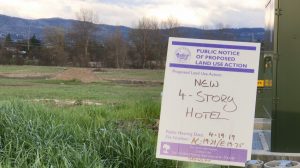 Medford, Ore. — People visiting the Rogue Valley may soon have a new option for overnight accommodations. Plans are currently in the works for a 4-story hotel in the new development off Garfield Street and Center Drive.

The City of Medford confirms the plans are for a Fairfield Inn & Suites by Marriott.

A public hearing is scheduled for April 19th before the Site Plan and Architectural Commission (SPAC). If SPAC gives the go-ahead, the company will be able to file building permits and start construction.