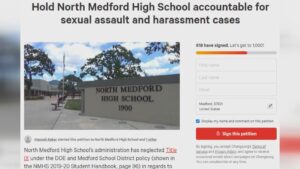 MEDFORD, Ore. — Medford schools could be making changes to sexual assault and harassment policies. It all started with a petition created by two North Medford High School students.

The students say they want to see changes, such as new response strategies for staff, more resources for victims, proper punishment for people responsible and more education in school about sexual assault.

Hannah Baker, one of the petition organizers, says no changes are set in stone, but she feels good about this first step.

“They seemed really concerned and they really wanted to change how things have been going. They talked to me afterwards and they’re really glad that we started doing this,” Baker said.

The petition was started about two weeks ago and has over 800 signatures. There is another meeting scheduled in September.