MEDFORD, Ore — A Medford woman is hoping for answers and relief after the closure of a local denture office seemingly unexpected.

Robin Miles-Barney was a patient at the now-closed Affordable Denture and Implants on September 20th. She paid nearly seven-thousand dollars for the procedure, but it’s not what she expected. 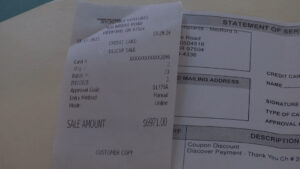 She said the temporary dentures she was provided, fall out of her mouth often and makes it difficult to swallow.

Miles-Barney said she called dozens of times over the last few months for an answer and a refund but hasn’t heard back. 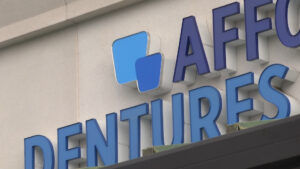 “They just closed their doors without notice,” Miles-Barney said emotionally. “It’s really wrong to do this to people and patients that trust in them.”

The office is located inside of Bear Creek Plaza off of Biddle rd. On Wednesday, a sign was placed on the door saying “Office closed until further notice. For questions or concerns call 1-800 336-8873.” 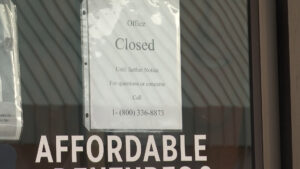 Miles-Barney is currently receiving help from a local denture clinic. The office shared she’s not the only one with the complaint about the business.

She later filed a claim with the Oregon Attorney General’s office about the situation.

“I just want other [affected customers] to call in, so we can get some justice.” said Miles-Barney.