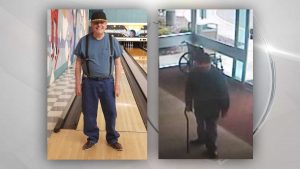 MEDFORD, Ore. – An elderly man who has been missing since Monday was found.

According to the Medford Police Department, 76-year-old Harold E. Poage left the Providence Plaza at 2:40 p.m. Monday. Police said Poage suffers from dementia and needed to be found. At the time, MPD said they believed Poage wasn’t very mobile. People who live in the area where he went missing were asked to search their properties and outbuildings.

Search and rescue crews scoured the area around Providence Plaza, but they couldn’t find Poage.

Just after 12:00 p.m. Wednesday, Poage was found alive in Medford. Police said, “A citizen found him in some bushes at the old bank building, at Crater Lake Avenue and Stevens Street. Harold was transported the hospital, and we are hoping for a full recovery.”