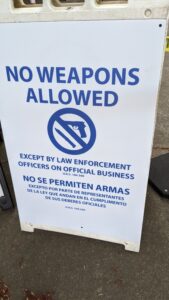 CENTRAL POINT, Ore.- Jackson County is educating the public after one of their signs at The Expo was misinterpreted. A local gun owner said he was turned away from getting vaccinated because of a sign that said no weapons allowed.

Bob Sutterfield – a concealed handgun license holder – went to the Jackson County Expo Monday morning to get his second vaccine dose. He noticed the sign and asked a volunteer. Sutterfield said he left because he had his gun with him and was told there are no weapons allowed.

Jackson County’s John Vial said the volunteer made a mistake, concealed handgun license holders can carry into The Expo to get a vaccine.

“This sign does not change any law that’s already in effect. The law regarding carrying weapons inside a public building is established and the sign simply notifies people of that,” said John Vial, Jackson Co. Emergency Operations Center Director.

The County said this is the first time the sign has been an issue. Vial said employees and volunteers now know the correct protocol.