YREKA, Calif — As the battle against the McKinney fire continues, dozens of firefighters from across multiple western states are working to mitigate the threat to neighboring areas.

The fire ignited Friday afternoon in the Klamath National Forest. It quickly exploded in size within 48 hours, burning more than 50,000 acres. As of Tuesday afternoon, it’s estimated at 56,165 acres and has yet to be contained. 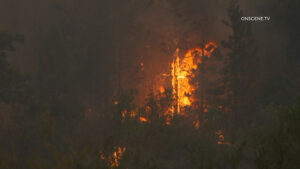 Since then, the fire slowly increased with favorable weather conditions benefiting firefighters. However, officials are preparing for fire behavior to pick up in the days ahead.

“It was serious fire behavior, very extreme and very dangerous,” Mike Lindbery, public information officer for the Mckinney fire, told NBC5. “As soon as these skies clear up, and as soon as this fire starts getting heat on it, it’s going to start moving again.”

Since being given an emergency declaration, crews from Oregon, Nevada, and California teamed up to help knock down the flames. 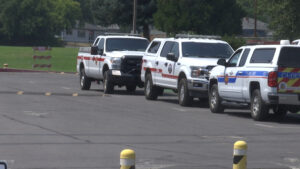 While what started the fire remains under investigation, KNF officials ruled out lightning as being the cause behind the deadly fire.

RELATED: Cause of McKinney Fire remains under investigation, lightning ruled out

The favorable rain and relative humidity early this week, allowed crews to take advantage and construct a line around the flames.
However, the concern moving forward is the threat of storms – which prompted a red flag warning Tuesday.
“If these storm clouds collapse, we could have outflow winds of up to 50 or 60 miles per hour,” said Lindbery.
The Mckinney fire is located about four miles west of Yreka. Lindbery said protecting the city is the number one priority as they work on containment efforts. 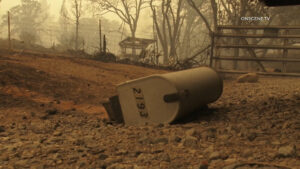 “We’re building up in case this thing starts moving again, Lindbery said. “These lines aren’t complete yet, but they’re in the process.”
Fire officials remind residents in northern California and surrounding areas,  to ensure they are registered under the CodeRed emergency alert system and understand which zone they fall under.
“The more informed you are, the more prepared you are when fires are burning in your area,” Lindbery said. “Always have a go bag, always be ready, and know your route of escape.
Tags: fire danger red McKinney Fire Siskiyou County
Share
Share on Facebook Share on Twitter Share on Pinterest Share on Reddit Share on Email