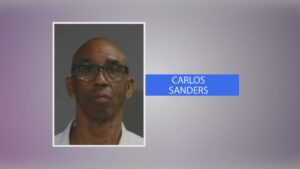 MEDFORD, Ore. — Medford Police say a man is in custody after allegedly firing off a gun and causing a standoff at an apartment complex in north Medford last night.

The incident happened on the 3100 of Juniper Ridge Drive.

MPD says officers responded to a report of a home burglary. Police say 60-year-old Carlos Sanders confronted a neighbor, then fired a handgun in the air and barricaded himself in his apartment.

SWAT and crisis negotiators responded to the scene. SWAT forced entry through the front door and took Sanders into custody.

Neighbors in the area tell NBC5 News they had to stay at a hotel overnight.

“They [police] really cared about everybody else. They were like, ‘okay, we need to evacuate these apartments’, I walked outside briefly and an officer told me ‘Get your wife and go, don’t come back.’ We grabbed our stuff [and left],” said neighbors Shawn and Lindsey Breen.

Sanders is charged with disorderly conduct and unlawful use of a firearm.