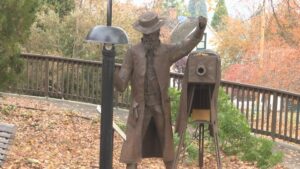 JACKSON COUNTY, Ore. –Mysterious letters are popping up at various parks across Jackson County and a lot of people are wondering where the anonymous letters come from.
Letters have been found at the chess player statue at Vogel Plaza in Medford, and at the Peter Britt statue in Jacksonville.
The letters tell a love story that took place almost 12 years ago between two partners. They’re titled, “To My Beautiful Hobbit.”
The short stories discuss love and heartbreak between two people looking to find their way back together.
A Medford woman started sharing the stories on social media, and they’re going viral.
“Friends have been commenting about how they can relate to this and how hard and about sending out positive thoughts for this couple to find each other again.”
The letter concludes by saying, “let’s fill the sky with love.”
No one seems to know who’s behind the letters.
But several people have told us they’ve found copies in Lithia Park.
Tags: found Jackson County Jacksonville myesterious letters parks vogel plaza
Share
Share on Facebook Share on Twitter Share on Pinterest Share on Reddit Share on Email