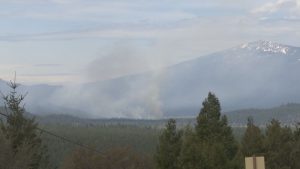 MEDFORD, Ore. — Fire agencies are doing what they can to contain the dozens of wildfires burning throughout the western states. But with so many to handle, there’s really no perfect plan of attack.

Northwest lawmakers have been putting out a call to thin out our forests. In May Oregon Senator Jeff Merkley led legislation to extend the Farm Bill and double it’s funding, alongside Idaho Senator Mike Crapo.

On June 11, it was announced that the 2018 Farm Bill doubles the size of the Collaborative Forest Landscape Restoration Program (CFLRP) and extends it though 2023.

According to senators, the program helps fund collaborative and community-based forest management and has a track record of improving forest health, reducing wildfire risk, and supporting rural communities.

“The result is a supply of saw logs for the mills, better fire resistance, better ecosystems and better timber stands. So it’s a win on every level,” Sen. Merkley said.

Sen. Merkley told NBC5 News he believes thinning is the best strategy to reduce wildfire risk, but adds that even with the Farm Bill, not enough is being done.

“We need the federal government to invest a lot more resources than they are right now,” Sen. Merkley said.

“We recently passed significant improvements to forest management policy into law, including making sure the Forest Service has adequate resources to fight wildfires so their forest management accounts are not depleted, and I worked to provide additional forest policy reforms in the 2018 Farm Bill that recently passed the House. While this progress is important, we have a long way to go.”