JOSEPHINE COUNTY, Ore — Firefighters in southern Oregon including the Oregon Department of Forestry, are staying alert as it continues getting warmer outside.

ODF deployed its first helicopter bucket on a house fire, near Blue Water Lane in Murphy on Monday. The home, which was destroyed in the two-alarm fire, also sparked two separate spot fires on the other side of the Applegate River according to Rural Metro Fire.

“This is the biggest structure fire that I think we’ve had in our response area this year,” Austin Prince, division chief with Rural Metro, told NBC5 Tuesday. “The occupants got out of the building safely and there were no injuries. It wasn’t a whole lot anybody could do to save the house, it was already so involved in fire.” 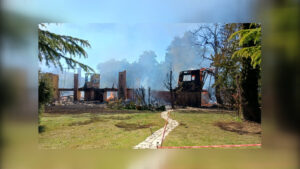 ODF said the spot fires each grew to about one-tenth of an acre in size. Nevertheless, its crews quickly responded because of the concern that it could grow.

“We will respond alongside our structural partners to structure fire themselves, just in case there is spread to wildland,” said Natalie Weber, public information officer with ODF.

“Firefighters were able to get on to that quickly, and get a wet line around it pretty fast,” Weber said. “They were able to catch it at a quarter acre in size, and that’s the largest that it grew.”

Despite the Rogue Valley receiving much needed rain over the last few months, fuels are drying up quickly in the warm temperatures according to ODF. While the current fire danger on ODF protected lands in Jackson and Josephine counties is low, crews continue to remind the public to always be on alert.

“From here on out, we can expect fires to start and spread, a lot more rapidly than they have been,” Weber said. “That’s something that every fire agency is gearing up for and we know we’re asking the public as well.”

Oregon U.S. Senator Ron Wyden met with local fire agencies at ODF’s southwest district office in Central Point on Thursday. He discussed his ongoing efforts to increase pay and other conditions for wildland firefighters. Wyden also sat down in our 5 on Five located here: