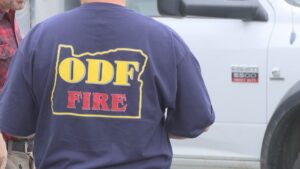 SOUTHERN OREGON — Rainy weather might be in the forecast, but the Oregon Department of Forestry’s Southwest District says we aren’t out of fire season just yet.

ODF says the season hasn’t yet been lifted due to inconsistent rainfall and extremely dry fuels in the area due to the drought.

It says depending on rainfall, the season could end sometime later this week.

“Until we get out of fire season, debris burning is going to be prohibited and it’s really just to protect our communities because those [burns] tend to happen closer to homes than neighborhoods and we’re doing everything we can to mitigate those risks right now,” said PIO, Natalie Weber.

So far this year, over 60 people have started illegal debris burns across Jackson and Josephine counties.

If people burn illegally, ODF says they could face a citation and fine, as well as paying for the costs of getting the fire put out.