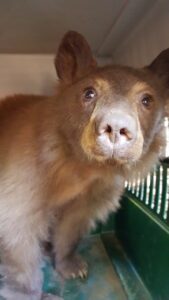 ASHLAND, Ore.- A young black bear euthanized by Oregon Department of Fish and Wildlife this week is bringing renewed focus to the dangers of interacting with wildlife.

According to ODFW, a man told Oregon State Police about a young black bear in the Greensprings area east of Ashland on Wednesday.

ODFW later discovered the man picked up the bear, which is against the law, and didn’t return it to the original location despite telling the agency he would.

After the man didn’t drop the animal off with a local wildlife rehabilitator, ODFW found the animal at his home, emaciated and tame, with no fear of people.

After consultation with the state’s wildlife veterinarian, ODFW made the decision to euthanize the bear.

ODFW says because of the bear’s age and condition, it was not a good fit for release into the wild or placement into a captive facility.

One facility in California who was hoping to get the bear says this is an example of why it is so important to let wild animals stay wild.

“Bears are so easily habituated, that’s why we always say ‘A fed bear is a dead bear.’ People, when they see wild animals, they want to take picture with them, get close to them, feed them. It costs the animals their wild life.” Bobbi Brink, the Founder of “Lions, Tigers, and Bears” a San Diego rescue facility.

ODFW says you should never remove a young animal from the wild. No one should assume any young animal is orphaned just because it’s alone.

Oregon State Police cited the man for holding wildlife without a permit.