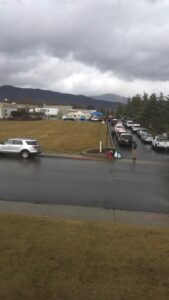 UPDATE 4:46 p.m. – One person has died in Friday’s officer involved shooting at a Yreka hospital.

Siskiyou County Sheriff Jeremiah LaRue says a deputy was bringing an inmate to the hospital for evaluation. The sheriff says there was a struggle and the inmate attempted to reach for the officer’s weapon. He says the deputy fired on the inmate. The inmate did not survive.

No names have been released at this time.

UPDATE 4:21 p.m. – In a news release from the Fairchild Medical Center, the hospital says no employees or visitors were injured in the Friday shooting.

Shortly after 1 p.m. the hospital says it locked down the facility, following a shooting which occurred in the parking lot outside the emergency department.

The hospital says it remained in lockdown until the Siskiyou County Sheriff’s Department gave the all clear.

Fairchild Medical Center says it will provide any necessary counseling and support to its staff.

YREKA, Cal. – The Siskiyou County Sheriff confirming Friday that they are investigating an officer involved shooting at the Fairchild Medical Center. That is a hospital located on the 400 block of Bruce Street in Yreka.

Photos from viewers show a large police presence at the hospital.

Further details were not provided by law enforcement.

NBC5 News is in contact with several responding agencies, and will continue to work to bring you updates on this developing situation.