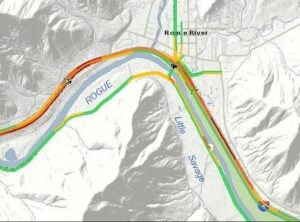 The Oregon Department of Transportation temporarily shut down all lanes of I-5 north and southbound from mileposts 48 to 55 for over an hour.

I-5 Northbound’s slow lane opened to traffic just before 5:00 p.m. Since then, all lanes have been reopened.