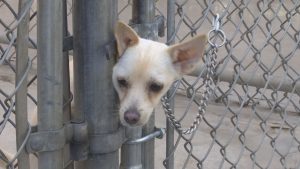 Medford, Ore. –  Lawmakers are considering a bill that would require dogs sold in pet stores to be from a shelter, humane society, or rescue organization.

The bill is aimed at cracking down on puppy mills by not allowing dogs to be sold at pet stores from breeders.

If passed, a pet store that violates the rules would be fined up to $500.

There is no word yet on when lawmakers will make a decision on this bill.