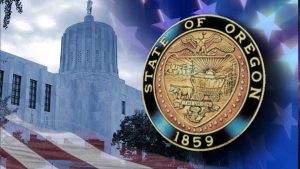 SALEM, Ore. – The Oregon house votes to expel Representative Mike Nearman. The Republican legislator from Independence, Oregon appeared to intentionally let a group of protesters into the locked Capitol building in December. This makes State Representative Nearman the first person ever expelled from the Oregon State Legislature in its 160-year history.

The historic vote comes after a recent video shows State Representative Nearman apparently coaching a group of people on how to enter the Capitol.

State Representative Kim Wallan talked with NBC5 News after the vote. She said the recent video of Nearman letting armed protesters inside the Capitol changed everything for the Republican Caucus. But Wallan said Nearman’s fate was sealed when he went on a radio show earlier this week confessing his crimes.

Thursday evening a special committee in the Oregon House voted unanimously to expel Nearman. Then, it went to the House for a vote with everyone voting to expel him from office, except Nearman himself. The vote was 59-1.

Wallan said she spoke with Nearman this week about his actions.

While Wallan wasn’t physically at the State Capitol during December’s insurrection she told NBC5 News there are accounts on both sides of the aisle where legislators were scared for their lives because of the violent protesters.

Wallan said even after this historic vote state leaders will resume business as usual. This session ends later this month.