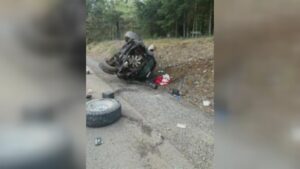 WONDER, Ore. — Oregon State Police says two people were taken to the hospital this morning, following a crash on Highway 199 near Wonder.

The passengers were taken to the hospital with serious injuries after their car went off the road and flipped.

Police say both passengers were ejected from the car. Rural Metro Fire says the car also struck a utility pole.

It says it’s unknown why the car left the roadway and the incident remains under investigation.

Highway 199 was temporarily reduced to one lane.