JCSO shared a detailed graphic Thursday, highlighting the current 253 adults in custody. The jail can hold about 300 individuals, but the Sheriff’s office says it scaled back the number of available beds to 250 because of the COVID-19 pandemic. 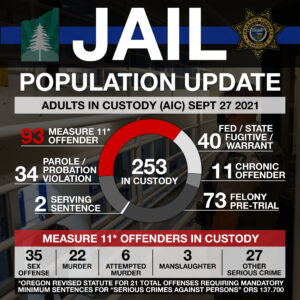 Because of the shortage, Sheriffs have been forced to release people arrested on low-level charges.

“It’s been kind of a weak link in our criminal justice system,” Sheriff Nathan Sickler told NBC5. “We just don’t have extra beds for a lot of our issues in the county.”

Sickler also noted the effects of Measure 11, which holds suspects who allegedly committed serious crimes against people from being released before trial. He says they have an unusually high number of Measure 11 AIC at 93 as of Thursday.

“As those individuals sit there, as they wait to go to trial, that’s a bed that’s taken up,” Sickler said. “Many of them may not be safe for our community to be out. Offenders are released prematurely without having resources to help their transition back into their community and it can actually be detrimental.”

Sheriff’s attempted to get a new jail through the 2020 election. The measure overwhelmingly failed with more than 70% of voters opposing the tax. The timing of the measure during the pandemic, likely played a role in people voting against it according to Sickler. He says they’re not sure just yet on how they plan to address the overcrowding issue moving forward.