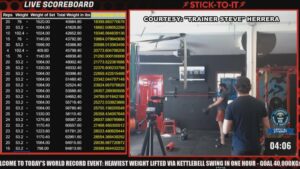 MEDFORD, Ore. — A personal trainer in Portland attempted a kettle bell world record Saturday afternoon, all in the name of diabetes awareness.

Steven Herrera, a.k.a. “Trainer Steve,” was live on his social media channels for the entire challenge.

The attempt was to swing 40,000+ kilograms with kettle bells in one hour.

That’s over 88,000 pounds, or about the equal weight of ten hippos combined.

He said he did it to raise money for the American Diabetes Association.

Steve said he witnessed his grandmother have a stroke as a result of her diabetes.

“It destroyed my eco-system and it wasn’t easy for my family either,” Herrera said. “One in three people have pre-diabetes. It’s a very serious disorder and we should be talking about diabetes as though it’s the Coronavirus, but we’re not so I am and that’s why I’m here attempting to raise funds,” he added.

Steve posted on his Instagram page saying they met the fundraising goal of $500.