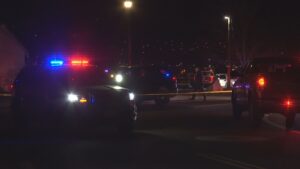 JCSO Spokesman Mike Moran says a man involved in the domestic disturbance call left in an SUV. The Sheriff’s Office also says another man, whose involvement has not been identified, also got in the vehicle.

Moran says police stopped the vehicle at the intersection of Idlewood and Stevens Rd. That’s near the entrance to the parking lot for Church on the Hill.

Moran says at 7:36 p.m., a deputy reported shots fired. He tells NBC5 News that one of the men inside the vehicle has died. The other man in the SUV was taken to the hospital with unknown injuries. Moran also says a JCSO deputy was shot by one of the occupants of the vehicle. He says the deputy’s injuries are minor and not life threatening.

Oregon State Police are now taking over the investigation.

EAGLE POINT, Ore. —Very few details are being released, regarding a shooting incident near a church in Eagle Point.

It happened before 8 this evening, off East Main Street and Idlewood Drive.

A section of the East Main was taped off from the public.

We’ve asked for more information from law enforcement, and are waiting for confirmation on the details of this investigation.

Stay with us for more on this developing story.