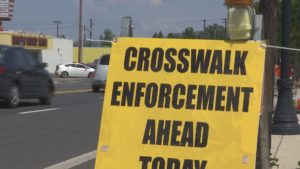 Undercover police were at Barnett and 4th Street for several hours Wednesday morning, citing drivers who refused to stop when a pedestrian crossed at a crosswalk. Medford police stopped a total of 42 drivers, giving out 44 citation for various violations. Seventeen of those citations were for drivers not yielding for a pedestrian.

“In our downtown area we have heavy foot traffic. Specifically, the area we used today we have very heavy foot traffic with nearby businesses and a lot of vehicle traffic as well,” said Sgt. Geoff Kirkpatrick, Medford Police Dept.

In recent years, Medford Police say they’ve seen a number of fatal accidents involving pedestrians. and hope people can be more aware. In Oregon, you’re required to stop for a pedestrian who is walking in your lane or the lane-adjacent.