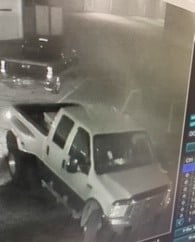 MEDFORD, Ore. — Medford Police is on the look out for multiple car thieves.

It says the trucks being targeted are Ford F-250s in the Medford area.

The alleged suspects are driving a Ford F-350 dually. It is not known if the dually is also stolen.

Police say all trucks were locked at the time of theft and have not been recovered.

If you have any information, contact the Medford Police Department.