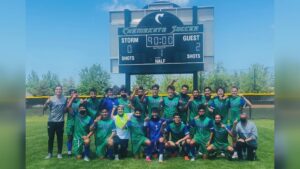 The team clinched the division with a victory in Salem against Chemeketa Community College.

The ospreys will return to the field again in August.