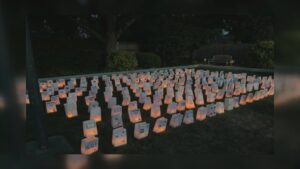 The ceremony is meant to honor people who are fighting cancer, have passed away from the disease or are cancer survivors.

The youth coordinator, Daryl Griggs, says teams are going to set-up their chosen locations with bags and candles for the ceremony tonight, which begins at 9 p.m.

Griggs says he believes there are over 1,000 bags that will be lit tonight, from Grants Pass to Klamath Falls.

Anyone interested in donating to the cause can visit here.