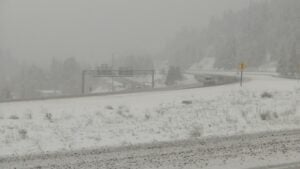 SOUTHERN ORE., NORTHERN CA. — Despite a winter storm that’s supposed to blow through the higher elevations this weekend, roads appear to be clear.

Both ODOT and Cal-Trans tell NBC5 News that traffic can be stopped in either Redding or Oregon, if winter driving conditions become severe enough.

Though conditions haven’t gotten bad enough for traffic to be stopped yet on either side, the Oregon Department of Transportation’s Gary Leaming says preparation is underway in case bad weather hits.

“We’re ready and fully staffed on the Siskiyou summit for this particular storm,” said Leaming.

Leaming says traveling on the interstate is usually a driver’s safest bet rather than using less maintained side roads.

ODOT says to use ‘TripCheck’ online before going anywhere to make sure roads are clear.